1. having to use public toilets. and being a nerd that enjoys a good explanation via math, here is roughly how it works out. [see fig. 1] 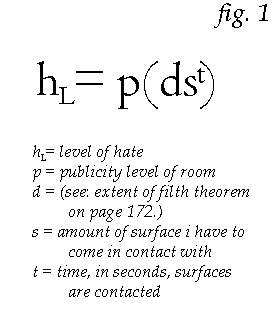 2. when sushimongers put wasabi on my sushi without:
a. asking if i wanted it.
b. listing such practices on the menu.

3. the expense of eating healthy foods. not that i eat only organic foodstuffs, but when i do, it would be nice not to have to pay double just to avoid growth hormones and the like.

4. lyrics like these:
"The more drinks in your system the harder to fight!"*
especially when they are just casually thrown in.
*underlining mine.

5. dealing with someone who is acting like an annoying teenager. i'd like to slap some sense into some people. where in the upper-case monkey does someone get the balls to act like that? [pardon me ladies, it is a guy, next time a girl pisses me off i'll be sure to include a female sex-hormone producing organ.]

it's easy to remember when it came